Amy M. Schaefer
Button Text
From 1993 to 1996, my husband was stationed at RAF Lakenheath in the UK (*one of my Aunt Mattie's dreams was to take a trip to Europe, which she got to do before she died). While I was living there, Aunt Mattie sent me her collection of short stories to do with as I pleased. All of these years, I've been enjoying her stories, as they always make me feel like she's right here with me, but it's time to share them with the world!

In her short story collection, Aunt Mattie shows what a hopeful and romantic soul she had. All of the net profits from this collection will be donated to College Park Baptist Church in Winston-Salem, NC, where she was a long-time member. College Park participates in a lot of missionary work, has a wonderful youth program, and has done many great things for the community over the years. Aunt Mattie would have loved having her stories "out there" and the fact that any money they make will go towards doing what she'd consider "God's work". Even though she never got above an 8th grade education, she spent her entire adult life working on the business of learning. She had a beautiful voice which I hope you'll all enjoy. 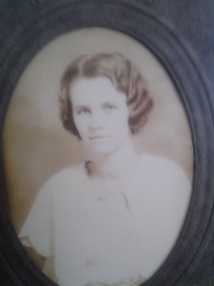 *I wrote this story for my English V460 class on 25 April 1999 and then sent it to Aunt Mattie. In 1997, two weeks after my mother's death, She had a debilitating stroke, so my Aunt Debbie read it to her and told me it made her smile and cry happy tears. It means a lot to me that I could bring some joy into her life during a time I know was filled with great suffering for her.

Part I: On The Other Side of Dreams

Mattie Shields sat at her dressing table, brushing her white hair. The vanity was a sturdy piece of cheery, with hand-carved designs and years of loving wear. It was beautiful in a timeless way, not unlike the reflection of the woman she saw looking back at her in the mirror. The corners of her sky blue eyes were lined with years of laughter. "Where have all the  years gone?" she pondered. She thought she'd have time to get to all of her dreams, to be a writer, and see the big, beautiful world for herself instead of just reading about it in the countless books she'd devoured over the years. But in a moment, she'd grown old.

Oh, there were few regrets. Look at all she had to show for her 90 years on this earth!  Hadn't she successfully raised three generations of her family's children? She'd had fifty wonderful years with her husband, who'd passed on sixteen years ago. She had a beautiful home, her dream home, set on three acres of land and filled with gardens overflowing with all the flowers she loved. Her life had not been unhappy. Her son had grown to be a successful businessman, married a sweet South Carolina woman, and was living a more-than-comfortable life in Indiana. Her daughter lived close-by, and they got to spend a lot of time together.

Time was something Mattie never took for granted these days. Life taught her that time was her most precious commodity and she'd learned this lesson particularly well. She smiled and said a little prayer of thanks for her many blessings. She heard her daughter come in the back door. "Mother," Janet called. "Mother are you ready?" Mattie looked at her watch, they were already half an hour late, but she wasn't in a rush so her daughter's usual tardiness didn't bother her. She stood up from the crushed velvet bench and brushed off her favorite pink suit. They were going to see the opening of a Victorian Period Exhibit at the Anthropology Museum at Wake Forest University. Her daughter, being an alumni, had gotten them free tickets, and Mattie could hardly wait to see it! She enjoyed history almost as much as she enjoyed these outings with her daughter. "Coming," she called back to Janet. Mattie picked up her practical little purse and, with a spring in her step, headed out to meet her daughter.

Mattie and Janet stood looking at an oil painting done by Sir Edward Burne-Jones. It was entitled Cupid Delivering Psyche, and it was on loan from the Graves Gallery, Sheffield Museums, England. They had spent the evening viewing intoxicating things from the reign of Queen Victoria. Mattie thought it would have been so exciting living in England during that time. Then, she would have loved to live in England at any time. Her great-niece, Amy, had lived there for three years and she'd loved getting letters from her filled with tales of the things she'd seen and done, like attending the Christmas Eve services at Ely Cathedral or wandering through the grounds at Warwick Castle.

Janet brought her out of her reverie. "Mother, I'm going over an speak to an old friend. I'll meet you back here in about twenty minutes. Okay?" "Yes, dear. You run along. I'll just wander about. I'll be fine," Mattie replied and walked off in a different direction. She came to a stop in front of a table that had been roped off. The table contained several artifacts that had belonged to the Queen, herself. A silver hairbrush caught the light, and Mattie's hand ached to touch it in a way she couldn't begin to understand or explain. She reached out and when her fingertips touched the brush's handle, she could feel a kind of electric crackle that began in her fingertips and slowly crept up her arm. When she gripped the handle tight, her entire body felt a rush of sparkling energy. She brought the brush up and began brushing her hair with its silk bristles. Then, the world around her went black.

Her first thought was, perhaps I am dead--but God, she felt so alive! If she were alive, then why did she feel so cold? She realized, then, that her eyes were tightly closed and opened them slowly. The world around her was so white it nearly blinded her. As her vision began to clear again, she realized why she'd become so cold. She was sitting in the snow. Fat snowflakes were falling on her face, as she took in the scene. A horse drawn carriage was moving at a slow clip on the street in front of her.

"Great granny's ghost!" she said. "Where am I?" "You're in London," a voice said from behind her. It was an incredibly beautiful voice that reminded her of the hand-bells she'd heard played by the choir at church on Sundays. She turned, and standing behind her was the most exquisite woman she'd ever seen. Her hair was mink dark, a velvety long veil of silk hanging over one shoulder and her eyes, a clear sky blue. Mattie knew she'd never seen such a magical, angelic face...and yet, it was somehow familiar to her. "Who are you?" she asked. "My name is Fannie, and I'm here to help you on your journey," said the lovely woman. "Am I dead?" Mattie asked. The woman laughed, not unkind, but in a comforting way. "No Mattie, you are very much alive. Don't you feel alive?" she asked.

Mattie took a deep breath. The cold air filled her lungs, burned the inside of her nose, and made her want to dance. It was at that moment Mattie looked down and saw her hand still holding tightly to the brush. Her age spots were gone! Her hands looked like they did in her youth! Her arms were those of the young woman she had once been. She was wearing a woven blue dress and on the ground next to her was an afternoon hat. "Gather your things, Mattie. I must get you settled before dark. It is not proper for a young lady to be traveling the streets of London alone after dark." "But where am I going?" Mattie implored. "To visit your family, of course." Mattie stood up and picked up the hat. She adjusted it on her head and turned to face Fannie. "How long will I be staying," she inquired? "Only a moment," Fannie said and wrapped Mattie in a long, woolen cloak, giving her a warm smile. She handed her a small suitcase, which Mattie was certain hadn't been there a moment ago, and took her by the hand. They began to walk down the sidewalk, and Mattie took in the beauty of her surroundings. They were in a residential area, and most of the dwellings were two-story brownstones. They were passing row houses and every now and then, they'd pass by a small shop or solicitor's office. Each building was as charming as the next. They stopped at a building surrounded by a large black iron gate. There were iron gargoyles sitting on the gate posts and Mattie smiled at the thought that gargoyles were good luck.

"Here we are," Fannie said. "Your Uncle Homer and cousin Latecia live here. They are expecting you. Enjoy your visit, and I will see you soon." Mattie opened the large gate and stepped in. She turned back to speak to Fannie but the ethereal beauty was gone. Perhaps I'm dreaming, she thought and then said aloud, "Well, a dream is as good an adventure as any!" She took a deep breath and proceeded up the snowy walk to the front door.